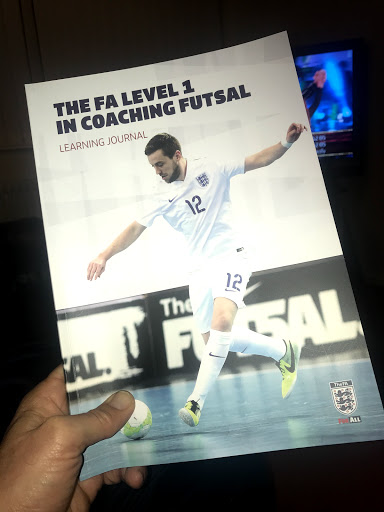 When I decided to start football coaching again the club secretary asked me whether I would like to attend a Futsol course. For those like me who didn’t know what Futsol was, it’s a five a side football game that is different to the five a side games we are used to in the U.K.  It is very popular in South America, Japan and Spain and Portugal and it is what a lot of the world top footballers were brought up on.  It is played with a smaller, heavier football that doesn’t bounce as much.

So here I was at Leeds Beckett University with what felt like a class of students. I was the oldest by about 20 years.  This was no problem in the classroom section of the course but when we got involved in the practical demonstrations of the game, it was a different matter.  I felt everyone of my 56 years! On one exercise I was up against a female school teacher.  I simply had to get the ball around her and put it into an empty net.  Ten attempts...no goals. It turns out that she was an ex Arsenal and Ireland international!!

The tutor was from Barcelona, Ivan, who I think must be inspired by Pep Guardiola.  He had their the  same intensity and passion for the game. To be fair he was brilliant. Anyway I realised I wasn’t as young as I once was or thought I was in my mind!

It didn’t make me mad just a little sad

Energetic youth all around me

Here I was on the Futsol course

Not sat on my sofa watching Morse

The classroom bit I took in my stride

Answered some questions tried not to hide

Now here was the tricky bit

Now I thought I was quite fit

In the hall youths buzzing around me

I felt rooted to the ground like a tree.

Then it came to me being in goal

Stopped a few shots good for the soul

Every time I made a save

Finally time for the big match

Worried I wouldn’t come up to scratch

Fortunately roll on roll off subs

Had I visited too many pubs ?

I was only on for a minute

Clearly they thought this was my limit

I only gave the ball away twice

They scored a goal a heavy price

Maybe it’s time to hang up my boots

In my mind I am a lot younger

Body reminds me I’m not ...bugger!