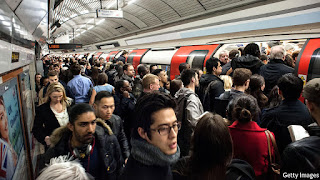 Last week we visited Cinque Terre in Italy. It is a beautiful place with 5 picturesque villages. However the tourist train that connects the villages felt like the London Tube at rush hour. Thus the inspiration for today’s ramble!
Mind The Gap
“Step back”
“Train approaching”
“Mind the gap”
Platform panic
Jostling for position
Pushing in
Without permission
A scrum develops
Which envelops
All but the mighty giants
And those who show defiance
With armoured elbows
“Keep clear of the gap”
The announcer bellows
This does nothing
To calm down the bustling
Every man women and child
Fighting for the space
They’re denied
Second guessing
Where the doors will open
A shimmy to the right
Another push no word is spoken
A foreigner tries to be polite
He is ignored as the train rushes in
Turbulence takes away the breath
A step too far and certain death
Squeezing, squealing a little teasing
Stopping in the station just
Travellers push and some thrust
Forward towards the gap they try
The doors finally open whereby
The tin of sardines spills out
Onto the platform as the announcer shouts
“Make your way down the train”
For some getting on is clearly in vain
Push and shove, a melting pot of nationality
For some this increases their anxiety
Luxury is a space to exhale
No point looking for a seat if you’re frail
On setting off there’s no eye contact
But plenty of body to body contact
Faces squashed against the window
Hoping not to brush against the weirdo
Whose doing his best to engage
Fellow travellers on this intimate stage
With a rant about politics and religion
So close to the next bloke
You can feel his circumcision
Station after station
The cast members change
All given the same information
Mind the gap
Carry on down the train
A step on the foot and someone’s in pain
Wishing they’d got a cab in the rain