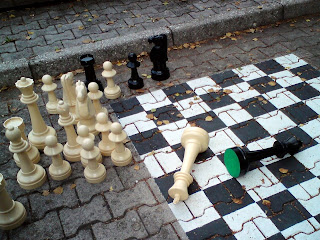 Yesterday my wife and I visited Leeds. We both independently had noticed that the place looked so much more downtrodden since we were last there, only a few weeks ago. We came across some guys playing with a giant chess set in the street. It got me thinking...
Checkmate
Two men locked in combat
On a once busy city street
Lines are drawn
Brains not brawn
Define these two urban thinkers
Chess is their weapon of choice
A battlefield laid out on the pavement
The King once powerful and all conquering
Now a shadow of what he used to be
The Queen once primed for hostile takeover
Moves aimlessly from place to place
In search of the hidden pot of gold
The Bishop can only stand and watch
As life changes beyond recognition
The Knight once glorious and sublime
Has fallen from grace
Committed a heinous crime
The Castle once the bedrock
Is now a dilapidated unloved shell
Where crowds of followers used to dwell
The pawns now trudge down trodden
Not knowing where to turn
Two men locked in combat
On a dying city street.