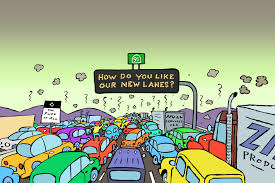 I woke up this morning in a rather confused state. I had set the alarm to be up to take Emily to the railway station. Somehow when it went off I had it in my head I had to go to work.  On realising this was just a fantasy, or should I say a nightmare, it got me thinking back to my daily commute to Bradford. How I don’t miss the daily battle with the M62. Never once did I win our contests!

So today’s poem is about the trials and tribulations of the daily morning commute routine...which I don’t miss at all!

Awoken from a broken sleep

I slap it on snooze

Counting down the seconds

To the second chime

One foot at a time

Eventually I’m out of bed

Slowly I shuffle to the bathroom

A look in the mirror

God my head does hurt

Have I got an ironed shirt?

Now where’s my wallet and watch.

Have I time for breakfast?

Look at the clock

Get to the car all frozen over

Where did I put my bloody de-icer?

Queue at the junction

No breakfast inside me

Radio on listening to Kylie

Time ticks on now getting in a stew

I hear there’s another accident

I look again at the clock on the dash

Can things get any worse

Get stuck try to reverse

There’s no way out

Will have to stick it out!

Always the one in the wrong ‘un

Surely this nightmare will end

On arriving at work I try to defend

To my boss why I’m late

He won’t allow any debate

“Get up earlier” he commands

The world was against me

On this the worst pursuit

The trials and tribulations

Of the daily commute.