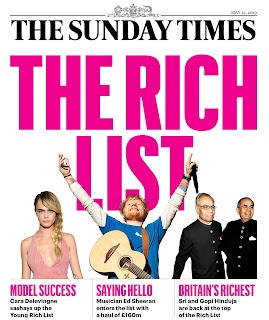 The third in my series of poems summarising today’s news.

A daily dose of caffeine makes you stronger
Coffee lovers live two years longer!
Rich people prepare to flee Britain
With increasing fears of Corbygeddon!
The publication of this year’s Rich List
Can’t find my name, again, really pissed!
There’s winners and losers and a has been
He’s no longer a billionaire Sir Philip Green
Streaming 1 film eats up energy
Same as boiling 60 cups of tea!
Like a stuck record it’s time to go for May
Husband no longer thinks she should stay!
Good news for those tying the knot
Today’s newly weds less likely to split!
Title decider Liverpool or City
Harry happy on nappy duty
Lottery winner money laundering
Staff misery for ministry not paying
Fingerprint technology not good when you’re old
The lines fade over the years so we’re told
So that’s the end of my news in rhymes
From today’s edition of the Sunday Times.