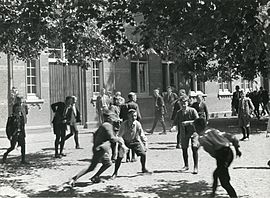 This morning I was reminiscing about my school days, particularly, as it was called in those day, “playtime”. I couldn’t wait for the bell to ring and to start playing football with a stocking filled with newspapers!

Playtime was about to begin

A cacophony, a wall of sound

Children running all around

Imaginary Batman was their escape

No balls allowed, not deterred

Competitive conkers, could it be fatal?

Marble, clackers, a game of jacks

Played behind the teacher’s backs

Timid ones stand and watch

One eye open for the school bully

What cross did he have to bear

Quashed forever by health and safety!

You Tube: The Retired Bloke