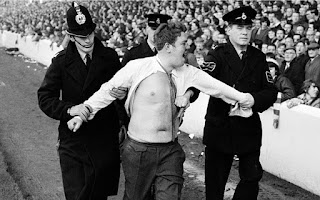 We were travelling back from the Comminty Shield match at Wembley on the tube. In the same carriage were a group of about 6 Liverpool fans chanting and banging the sides of the carriage. Although not physically aggressive it certainly made you feel uncomfortable. These guys were mainly middle aged. One of them broke off the chanting to talk to a couple of Americans. Although still slightly pissed it was clear that he was a well travelled and educated individual. This inspired today’s poem.

Monday morning dressed in a suit

A businessman of high repute

A normal life it would appear

That was until ten pints of beer

And Saturdays with his fellow fanatics

Pretty pissed before the second half

Fists at the ready for another fight

Told to sit down by the stadium speakers

Lays one on the steward that cost him dearly

A night in the cell to sober up alone

Then back to his wife in his suburban home!